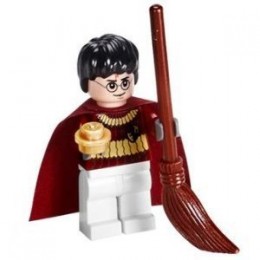 If your kids are anything like mine they’re never happy if they’re missing an item from a prized collection. Like most kids, mine are huuuuuge fans of Harry Potter, desperately awaiting the next book, film, video game or toy release.

My eldest, Adam, is a massive LEGO fan. I forced it on him from an early age, and he took to the sets like a duck to water. Naturally, then, he has a lot of Harry Potter LEGO toys, and there’s always one more thing he desperately needs. “Oh, but Daaaaaaad, if I don’t get the LEGO Hogwart’s Castle I won’t be able to play that scene from…” and then he tails off onto a detailed description of a scene I don’t even remember from the movies.

For Christmas this year I thought I’d buy Adam every single one of the LEGO Harry Potter minifigures. He may not have all of the toy sets, but as long as he has the minifigures he can at least pretend our sofa is Hogwart’s.

Anyway, to do this I had to put together a complete list of the LEGO Harry Potter minifigures, and in doing so I was surprised to find that there are a hell of a lot of Harry Potter LEGO versions available. I’d intended to buy every character, but now I’ve decided to just buy every version of Harry Potter himself.

This is your basic, run of the mill Potter minifigure, released in 2010 and still the current model. Harry is dressed in his Gryffindor shirt, tie and sweater, and the character carries a wand.

The second Potter LEGO minifigure is pretty cool (Adam will love this one). Harry is decked out in his Quidditch costume, complete with cloak, broomstick and a LEGO golden snitch block.

Wearing a simple t-shirt and blue jacket, this is a basic minifigure for those adventures out in the real world among the Muggles. Harry comes equipped with his wand, just in case any agents of darkness are in hot pursuit.

In this minifigure Harry comes dressed for the Triwizard Tournament, a magic contest held between the three largest wizarding schools of Europe.

Here Harry goes up against the Durmstrang Institute and the Beauxbatons Academy for the honor of lifting the Triwizard cup.

Finally, here’s Harry in a tattered tournament outfit. After facing the harsh trials of the Triwizard tournament Harry finds himself face to face with the reborn Lord Voldemort. In his torn and damaged tournament uniform he wages war on the dark lord.