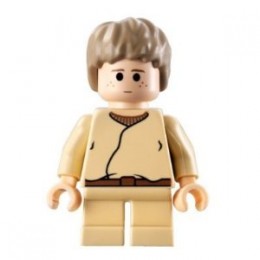 Of all the LEGO Star Wars characters there have been few that have come in as many variations as that of Anakin Skywalker. After all, the Star Wars series followed his life from young boy to rebellious youth all the way through to dying, half mechanical old man. It makes sense, then, that there be a separate LEGO minifigure for each of the seminal points on Skywalker’s life.

Today we’ll run you through the options for LEGO Star Wars characters, and we’ll provide links to the vendors with the lowest prices. As best we can we’ll present them in chronological order.

First, of course, is young slave boy Anakin as he appeared in The Phantom Menace. Anakin is the indentured servant of Watto, a sleazy, greedy second hand goods salesman in Mos Espa, Tatooine.

This first Anakin LEGO figure is simple and basic. Anakin is wearing a tan tunic, tan trousers and a brown belt, and the figure comes with a mop of mousy hair. Most accurate of all are the wide, innocent eyes of a young slave boy/amateur tearaway pod racer.

The eagle eyed among you may notice that the Tatooine Anakin LEGO minifigure has shorter legs than your usual LEGO character. Before the introduction of this figure most LEGO characters were the same size, regardless of the actual height of the character.

The thinking is that LEGO decided to move towards a non-standard sizing model after realizing the popularity of movie tie-in characters and sets, so they’d need to make shorter figures for certain characters from the Star Wars/Harry Potter universe.

Next up we reach the later scenes of The Phantom Menace, in which Anakin attempts to help Qui-Gon and Obi-Wan win the parts to repair their ship in a breakneck pod race. Anakin begins the race against Sebulba and a band of lightning reflexed aliens with a calm, determined face. As the race goes on, however, his head can be spun around to reveal an angry snarl and fierce eyes behind his racing goggles.

The Anakin LEGO character comes with a removable helmet, tan tunic (with the necklace given to him by his mother) and tan trousers.

Like the original Anakin figure this one comes with short legs, a new innovation from LEGO.

And then we come to the end of The Phantom Menace. Anakin is taken by Qui-Gon from Tatooine to Naboo, where he finds himself embroiled in an illegal conflict with the Trade Federation. After stealing away into a ship, Anakin ‘accidentally’ flies solo to the Trade Federation blockade, kitting himself out in a cool helmet in the process.

Anakin goes on to destroy the Trade Federation command ship with a lucky shot, escaping just before the explosion destroys the ship.

This LEGO Anakin figure changes the facial features slightly, despite the fact that this character is only a few days older than the character portrayed in the first two figures. The young boy now has full sized legs, and while he’s still dressed in the costume he wore as a pod racer there are clearly some large differences.

The grey helmet worn by Anakin features a pair of flight goggles that can be snapped up or down to cover or reveal the eyes.

Next up is a character from an all too brief portion of Anakin’s life. After the death of Qui-Gon Jinn at the hands of Darth Maul, Anakin is taken under the wing of a young Obi-Wan Kenobi, who pledges to train Anakin in the ways of the the Force. For a time Anakin is satisfied, honing his skills and learning the full powers he’s capable of.

This LEGO Anakin figure reflects this part of his life. Anakin is dressed in his Padawan cloak, fitting for a novice Jedi. He has a smile on his face, and at the back of his head you’ll find that God awful rat tale that was apparently in fashion a long time ago in a galaxy thankfully far, far away.

Here are two separate figure I’ve bundled together as they’re so similar. Both figures represent Anakin’s journey to the dark side.

The first figure shows Anakin with a black, prosthetic right hand, the original having been lost in a fight with Count Dooku in Attack of the Clones. Anakin’s face is scarred, and his dark outfit and brooding expression make it clear that he is turning towards the dark side of the Force.

The second figure is much the same. Anakin’s hands are covered by dark gloves, he’s dressed in black and his darkness is hidden beneath cloak and cowl. Peering out from the hood you’ll see his scarred face and rage-filled eyes as he is finally consumed by the dark side.