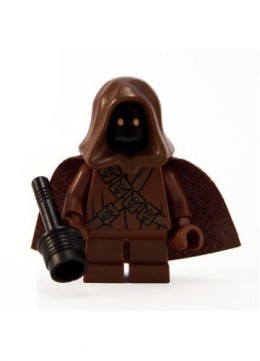 I recently seemed to have developed an obsession for collecting LEGO Star Wars minifigures – partly because my son is a huge fan of both LEGO and Star Wars, and partly because I spent most of my childhood deeply in love with both of these things, and I’m not using my little boy as an excuse to play with toys again (the joys of parenthood, right?).

When I began buying LEGO Star Wars minifigures, though, I found that it’s pretty difficult to get individual figures at a reasonable price. Most of the minifigures are only available when you buy them with expensive LEGO sets, so whenever you find individual minifigs you can expect the price to be above $30. I love these little guys, but that’s a little too steep for me.

When I recently went on a hunt for a LEGO Jawa minifigure, though, I found the perfect place to buy them for a good price: Amazon. Here’s the LEGO Jawa I was shopping for…

When these little guys were first released you could only get a hold of them if you bought the LEGO Sandcrawler set – a very expensive kit that comes with 11 minifigures, including 3 LEGO Jawas.

The LEGO Sandcrawler set is a rare collectors item that retails right now at almost $400. There’s just no chance I could afford to lay down that kind of money for a toy, no matter how deep my love for LEGO or Star Wars.

I was pleased, then, to find that Amazon are selling LEGO Jawa minifigures individually for just $18.99. I picked up three of them to complement the homemade Sandcrawler set I’d made from some basic LEGO blocks.

The Jawas are among my favorite LEGO minifigures. The level of detail is fantastic for such small figures: the cloaks are made from acrylic, the torso detailing is great and the eyes glow yellow, just like the Jawas in A New Hope.

As I was looking around the site, and as I was choking on my coffee when I saw the price of the LEGO Sandcrawler, I began to fall in love the the set, no matter how expensive it was. Just look at this thing. It’s damned cool. 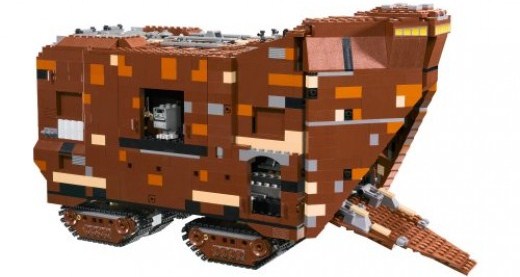 At first glance the natural reaction of any sane person would be to shout at the screen ‘HOW MUCH?!’. The second reaction would be to laugh out loud at the cheek of LEGO to charge $389.99 for a toy. When you think about it a little while, though, it’s not all that crazy.

First you have to look at the level of care and detail that’s gone into the creation of the LEGO Sandcrawler. With 1,669 parts this model is immensely intricate, and just the construction of it would be a joy that’d last several days. The model, designed by LEGO in conjunction with diehard fans, is screen accurate in every way (well, as far as screen accuracy is possible with LEGO pieces).

The model features a Jawa workshop, a droid crane (for lowering the droids for sale down from the workshop), an opening cockpit and a working steering mechanism with moving treads. Included minifigures are: 3 Jawas, 5 assorted droids, 1 Uncle Owen, 1 C3PO and 1 R2-D2 (watch out, one of the droids has a bad motivator).

OK, so this thing is dangerously expensive. For me, the price puts me out of the running. I’ve got too many bills to justify a purchase like this, but if you’re a serious collector you’d probably consider it a worthwhile investment. All I say is that this is an essential for any collector’s Tatooine set.