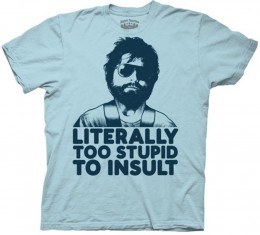 Cult comedy movies never fail to produce an endless supply of catchphrases, and more often than not these catchy sayings end up plastered over a million t shirts. The Hangover movies are no exception. Alan Garner (Zach Galifianakis), Doug’s awkward, inept future brother in law, was a particularly fruitful source of craziness, and in the two years since the release of the movie (and its 2011 sequel, The Hangover 2) there has been an enormous amount of interest in getting Alan’s craziest catchphrases displayed on the chests of movie fans around the world.

As an aside, until a couple of months ago I was living with my partner in Bangkok, Thailand, and it seems as if, in the wake of the release of the sequel, the Hangover t shirt has become a staple item of vacation wear for those embarking on a tour of South East Asia.

Anyway, we’ve taken a look around the Internet, sifted through the crap and picked out some of the best Hangover t shirts available today. Observe…

Hangover T Shirt: Not a Purse, a Satchel

“It’s not a purse, it’s a satchel… Indiana Jones wears one.”

This classic line comes from the first Hangover movie, and the t shirt perfectly captures the moment (and Alan’s craziness).

“… And six months ago, when Doug introduced me to you guys, I thought, “Wait a second, could it be?” And now I know for sure, I just added two more guys to my wolf pack. Four of us wolves, running around the desert together, in Las Vegas, looking for strippers and cocaine. So tonight, I make a toast!”

“One of the side effects of roofies is memory loss.”

“You are literally too stupid to insult.”

“Is there a payphone bank? Buncha payphones? Business.”

Finally, you can’t help but love this yellow lab t-shirt worn by Alan in the first Hangover movie. Just adorable.