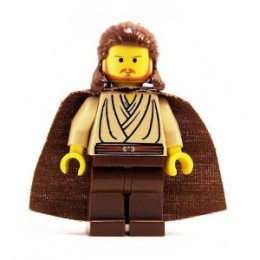 We write a lot about Star Wars LEGO here, and while, when we began, we assumed it’d be a quick, simple subject to write about, as time has gone on we’ve realized that the Star Wars LEGO world is as vast and complex as that of the movies themselves. Today we’re gonna chip away at one small corner of the LEGO Star Wars universe: LEGO Qui-Gon Jinn.

Qui-Jonn, ably played in the Star Wars movies by Liam Neeson, has appeared in two basic variations in the world of LEGO, and seven times altogether (between different LEGO Star Wars sets).

Qui-Gon always appears with either long, flowing hair or a dark cowl attached to a cloak. His first incarnation, appearing in set 7665 (Imperial Cruiser), he came with tan legs, tan torso and a hood, but somebody screwed up and gave him the wrong head! The Qui-Gon minifigure was given the head of Obi-Wan Kenobi, an oversight that was quickly pointed out and corrected.

The minifigure is now quite rare and collectible, and can be found for around $17 online.

The updated and accurate Qui-Gon, released for 2011, finds the correct head on his shoulders, lacking the hood in favor of a long, flowing mane that extends down his back. The character comes with brown legs, a tan torso, acrylic cloak an, of course, his green lightsaber. Both the tan tunic and utility belt designs have been updated for the 2011 release.

While the original Qui-Gon Jinn was, of course flawed in that it looked absolutely nothing like Liam Neeson (as much as any Star Wars LEGO minifigure can ever really look like the character it’s based on, what with being a plastic block and all), I much prefer the original. The hair on the 2011 updated figure looks a little weird to me, but the cowl worn by the original figure is pretty damned cool. With a little luck LEGO will revert to the cowl arrangement in the future.