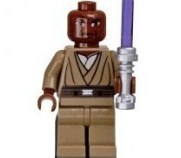 LEGO Star Wars Minifigures are the perfect storm of collectible toys. It’s pretty much an immutable law of the universe that every kid (or grown up kid) loves Star Wars, and I’ve yet to meet a youngster who doesn’t go crazy over LEGO. Put the two together, then, and you’ve got the perfect toy.

So, if you’re in the market for minifigures of your favorite Star Wars characters, read on…

First we’ll take a look at the main players in the Star Wars universe. No collection is complete without the original team, so let’s begin with Luke, Leia, Han, Chewbacca, Obi Wan, C3PO and R2D2…

You’ll notice that the Obi-Wan minifigure is modeled on Alec Guiness (i.e. ‘old Obi-Wan’). As I have an ounce of common sense I do, of course, prefer the original Star Wars trilogy to the modern, CGI-packed toy commercials Lucas pumped out for a quick buck.

However, if you insist on preferring the modern day ‘young’ Obi-Wan you can also find a minifigure modeled on Ewan McGregor…

These LEGO minifigures are pretty cool, as you can see. Han comes equipped with his trusty blaster (‘Hokey religions and ancient weapons are no match for a good blaster at your side, kid.’)

Of course, Star Wars wouldn’t have been Star Wars without the vast array of supporting cast from Yoda and Darth Vader all the way down to the faceless stormtroopers.

Now, the supporting cast of Star Wars was large enough to fill a galaxy, so rather than go through each individual minifigure I’ve just picked out a few of my favorites and posted links to the rest.

One thought on “LEGO Star Wars Minifigures For Sale”